This was my final piece for my 3rd year Contemporary Media Arts project in which I created a Website, portfolio and interactive exhibition whereby I handed out printed leaflets to the audience. The leaflets had 3D scissors on one side and what I'd like to call 'truth hurts advertising' (i.e. two beautiful models smiling and laughing with a speech bubble "fill that void of emptiness! Consume More!! "). I then gave a short introduction to the audience and asked them to participate in cutting loose the "strings" of Media control above their own heads. I then asked them to collect a real pair of scissors from the front desk and to destroy the final piece (image above) It was printed on three A0 pieces being around 1.19m x 2.53m in size. 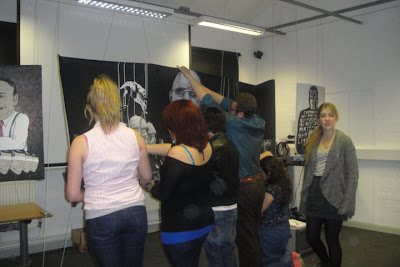 This image was taken while a few of the audience members helped cut up and destroy the final piece.
If you look at the final piece closely you may be able to notice certain patterns and ideas I intended to construct through the general concept of the piece. The strings do not just lead to the 'all powerful' figure of Rupert Murdoch but carries on upwards leaving a question mark of how far the control goes? whether the control can be stopped? as we go down the chain the strings become weaker ... stronger in the beginning and slowly decreasing in control becoming less and less until it reaches the public who have the ability to cut these "strings" of Media control. The structure of the image and size of the individuals involved is in the shape of a hierarchy ... again, pointing to the control and presence over the messages we hear constantly through our daily lives. The conveyor belt is there to represent what the general public are to media companies ... a product of their creation. They choose what shows we watch, how we should dress or even feel. They hold all the information we receive on a daily basis and can fill us with fear or or peace ... but fear brings more profit. If you havent seen it already I highly recommend Outfoxed: Rupert Murdoch's War on Journalism (2004) or the Michael Moore documentary Fahrenheit 9/11 (2004) , both are very interesting takes on media control and how too much power in the wrong/right hands can be used as an immense force. The broken television on the right hand side of the image is a representation of the eventual final stage of blindy following the media, conforming to all its messages and becoming a passive viewer. A lot of the public will happily sit back and accept the media to be truthful and unbiased or as the Fox News slogan put it "Fair and Balanced" ... The purpose of the project was to hopefully motivate the audience to ask themselves what intentions the media they watch has and where that came from.

This is the link to the Website I made:
http://personal.rhul.ac.uk/ztwf/072/HOME.html (apologies if it takes a while to load)
Posted by Ben May at 11:28